Our Dog Tommy Rescues a Squirrel

My dog Tommy is not too adventurous. He prefers sitting or lying in his coach for hours rather than moving around the homestead. My veterinarian has been advising me to be taking Tommy for walks instead. Tommy is gradually changing his behaviors, and he might spend an hour or two exploring our homestead whenever I am busy for walks.

I love nature. For this reason, I bought land near a forest. My days start with bird’s melodies, and all sought of sounds from various animals. You cannot stay for more than three hours without spotting a bird or an animal. My dog enjoys chasing birds and seeing them fly. In the evenings, you may find him starring at birds and probably wondering how they can climb trees.

Recently, I saw something unusual. Tommy was standing near a squirrel licking her fur. I thought the squirrel was dead. On taking a closer look, I noted that the squirrel was alive. I would have expected a dog to chase the animal and kill it. However, the two were getting along well, and disturbing them would not be fair.

Nowadays, Tommy is rarely chasing birds. However, he has identified another friendly animal, the squirrel. Whenever I am busy for walks, Tommy spends a lot of time near the bushes waiting for the squirrel. It is as if the two animals have been communicating once they meet. At times, I enjoy seeing Tommy running after the squirrel for fun. However, squirrels have a lot of enemies. Therefore, any distraction or the art of any other animal appearance causes the animal to hide.

One day after taking an afternoon nap, I decided to take a walk in the bushes. I allowed Tommy to accompany me. We entered the nearby forest for a nature walk. Tommy would run after animals and birds. It was more fun to see him jump after insects due to curiosity. It is as if Tommy was connecting to nature with time. He seemed happier than before. We explored the deeper sides of the forest, enjoying life and all sorts of sounds. After two or three hours walk, we started our journey back.

Our returning journey was relatively fast as the sun was going down slowly. Luckily enough, we made to our homestead in time before darkness caught up with us. However, once I opened my gate, I saw a snake running after a squirrel.

Tommy did not wait for any command. He runs very fast and started chasing the snake. The snake had two enemies to deal with. The aspect confused it and lost focus. I tried to call Tommy issuing stop commands with no avail. He was ready to fight for his longtime friend. The snake tried to attack Tommy. However, there were no signs of my Tommy retrieving. He kept barking with his canines, ready to bite. The snake was left with no option rather than flee.

The next morning, Tommy was busy looking in the bushes expecting something. I knew he was waiting for his friend, the squirrel. After a whole hour of waiting, Tommy felt relieved once the squirrel appeared. It was the relief of saving a friend. The two were together again, and their friendship kept growing. 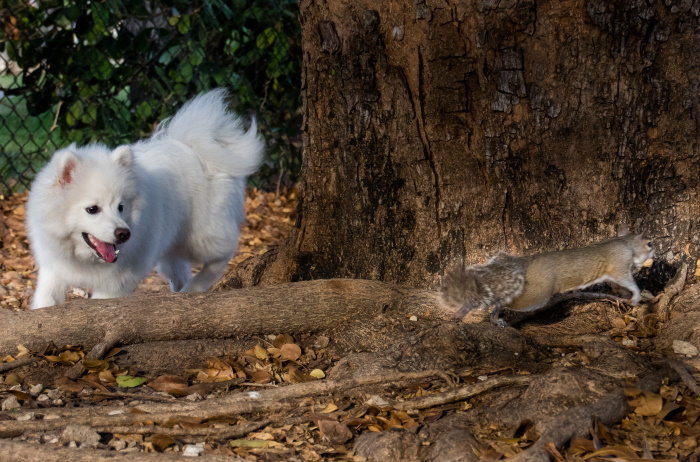