What Vaccines Does My New Puppy Need?

When you first adopt a puppy, there are many things you must do. One of which is to find a veterinarian to look him or her over to see how healthy he or she is. You will also need your veterinarian to start your new puppy’s vaccination schedule.

Note: Always trust and seek the advice of your veterinarian before a random internet source.

What is a vaccine?

A vaccine is a medicine, generally given via an injection, that prevents a disease by making the patient immune. Typically a vaccine gives immunity to a viral infection, but it can also provide immunity to bacterial or other types of infections. The vaccine itself might be a dead or weakened virus, or a toxin that a bacteria creates. This causes the body to react and create antibodies without the risk of actually getting the disease.

Which vaccines should I get my puppy?

Kennel cough is named so because it is often transmitted via a cough when dogs are kept in close quarters, such as in a kennel. Some people consider kennel cough vaccines optional, however, many kennels require that dogs receive this at least two weeks before boarding. It can be caused either by the bacteria Bordetella bronchiseptica, or the viruses canine parainfluenza and canine coronavirus.

Even though it is “optional” I would still suggest your puppy getting it. Even if you have no plans on boarding him or her, it takes two weeks for the vaccine to take effect. If you have a sudden emergency and need to board your puppy, you might have a hard time finding a place that doesn’t require this vaccine - and if you found such a place, would you want to leave your dog there?

Symptoms of canine distemper include a high fever, discharge from the eyes and nose, vomiting, diarrhea, and most notably hardening of footpads and nose. Neurological damage can occur as well.

Canine hepatitis, which is caused by a different virus than human hepatitis, can cause fever, loss of appetite, and coughing.

Leptospirosis often shows no symptoms. However, symptoms can include fever, vomiting, diarrhea, loss of appetite, lethargy, stiffness, and infertility.

Lyme disease is normally transmitted via ticks. While it causes a rash in humans, this is not the cause with dogs. Instead, the dog will start to limp, get a fever, and lose its appetite.

Canine parvovirus causes a particularly nasty disease (often called “parvo”). The dog has a fever accompanied with a lot of vomiting and bloody diarrhea. This causes the dog to be extremely dehydrated and feel lethargic and sick. It is not something you want any dog to go through.

This is the disease that got Old Yeller. Rabies is transmittable to humans and is normally fatal. Only a handful of people have survived rabies - a Google search suggests that three people had survived as of 2008, and by 2016 that number had risen only to 16.

As such, many states and jurisdictions require that dogs receive a rabies vaccine. Often there is an additional tag the dog must wear that shows the rabies vaccine was given. 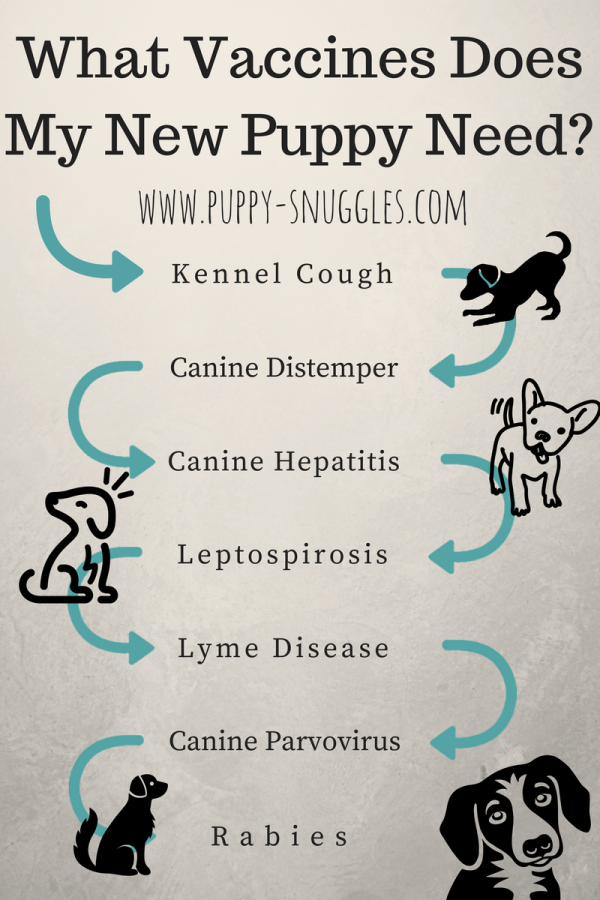